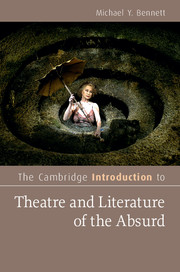 The Cambridge Introduction to Theatre and Literature of the Absurd