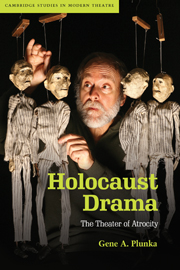 Holocaust Drama
The Theater of Atrocity