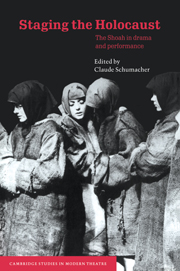 Staging the Holocaust
The Shoah in Drama and Performance