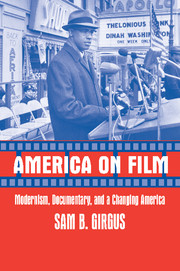 America on Film
Modernism, Documentary, and a Changing America