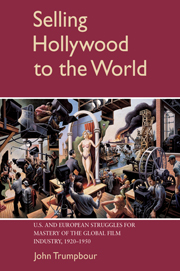 Selling Hollywood to the World
US and European Struggles for Mastery of the Global Film Industry, 1920–1950