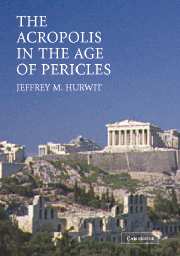 The Acropolis in the Age of Pericles
Paperback with CD-ROM

Out of Print
Mixed media product