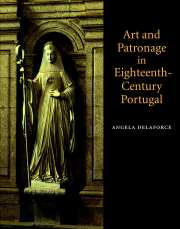 Art and Patronage in Eighteenth-Century Portugal