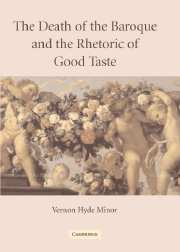 The Death of the Baroque and the Rhetoric of Good Taste