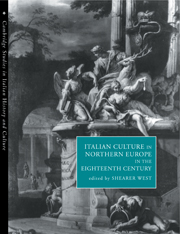 Italian Culture in Northern Europe in the Eighteenth Century