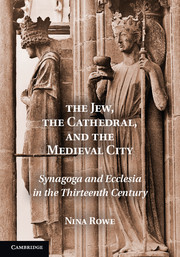 The Jew, the Cathedral and the Medieval City
Synagoga and Ecclesia in the Thirteenth Century