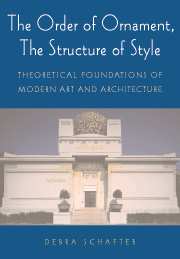 The Order of Ornament, The Structure of Style
Theoretical Foundations of Modern Art and Architecture