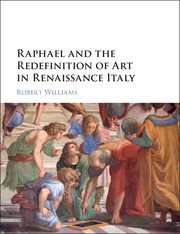 Raphael and the Redefinition of Art in Renaissance Italy