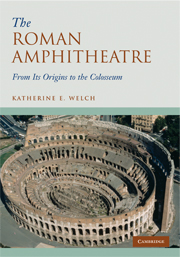 The Roman Amphitheatre
From its Origins to the Colosseum