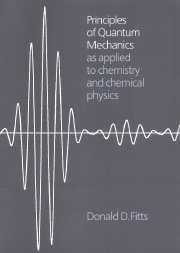 Principles of Quantum Mechanics
As Applied to Chemistry and Chemical Physics