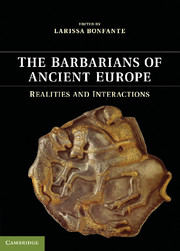 The Barbarians of Ancient Europe
Realities and Interactions