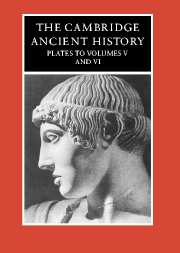 The Cambridge Ancient History
Plates to Volumes 5 and 6