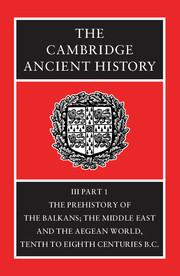 Part 1. The Prehistory of the Balkans, the Middle East and the Aegean World, Tenth to Eighth Centuries BC