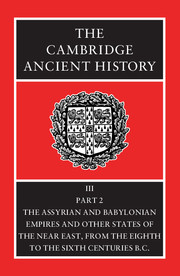 Part 2. The Assyrian and Babylonian Empires and Other States of the Near East, from the Eighth to the Sixth Centuries BC