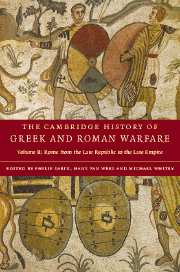 Volume 2. Rome from the Late Republic to the Late Empire