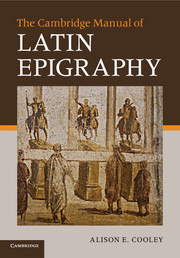 The Cambridge Manual of Latin Epigraphy