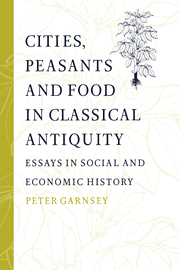 Cities, Peasants and Food in Classical Antiquity
Essays in Social and Economic History