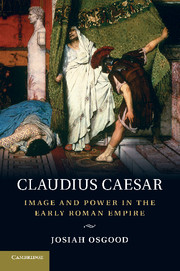 Claudius Caesar
Image and Power in the Early Roman Empire