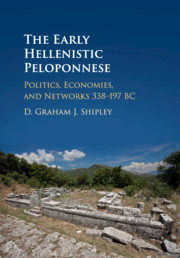 The Early Hellenistic Peloponnese
Politics, Economies, and Networks 338–197 BC