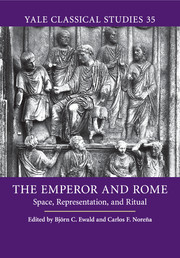 The Emperor and Rome
Space, Representation, and Ritual