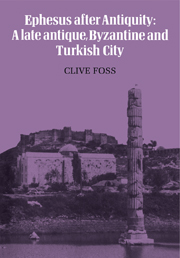 Ephesus After Antiquity
A late antique, Byzantine and Turkish City