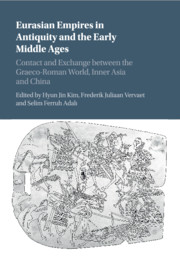 Eurasian Empires in Antiquity and the Early Middle Ages
Contact and Exchange between the Graeco-Roman World, Inner Asia and China