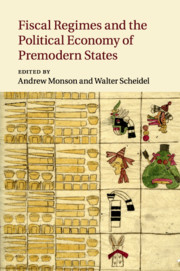 Fiscal Regimes and the Political Economy of Premodern States