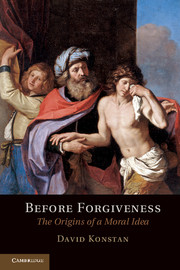 Before Forgiveness
The Origins of a Moral Idea