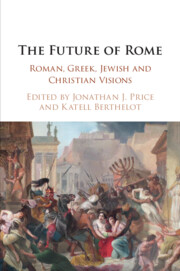 The Future of Rome
Roman, Greek, Jewish and Christian Visions