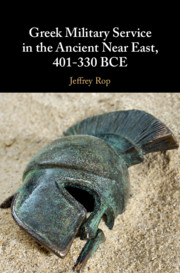 Greek Military Service in the Ancient Near East, 401–330 BCE