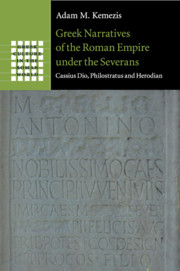 Greek Narratives of the Roman Empire under the Severans
Cassius Dio, Philostratus and Herodian