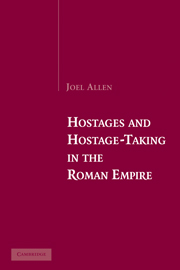 Hostages and Hostage-Taking in the Roman Empire