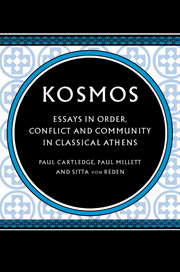 Kosmos
Essays in Order, Conflict and Community in Classical Athens