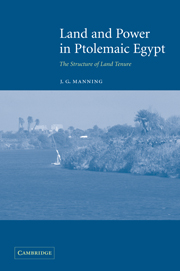 Land and Power in Ptolemaic Egypt
The Structure of Land Tenure