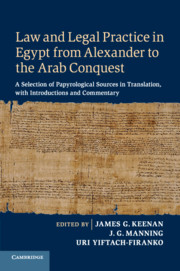 Law and Legal Practice in Egypt from Alexander to the Arab Conquest
A Selection of Papyrological Sources in Translation, with Introductions and Commentary