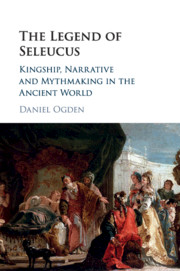 The Legend of Seleucus
Kingship, Narrative and Mythmaking in the Ancient World