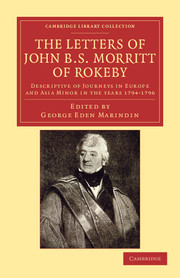 The Letters of John B. S. Morritt of Rokeby
Descriptive of Journeys in Europe and Asia Minor in the Years 1794–1796