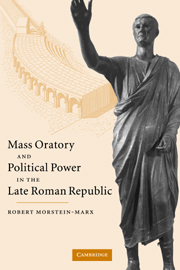 Mass Oratory and Political Power in the Late Roman Republic