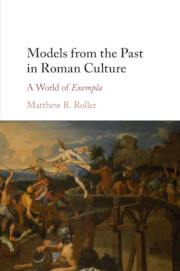 Models from the Past in Roman Culture
A World of Exempla