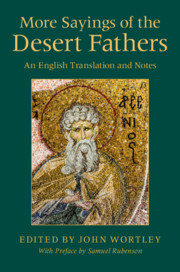 More Sayings of the Desert Fathers
An English Translation and Notes