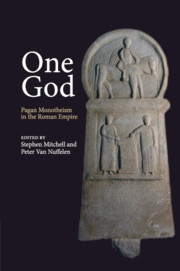 One God
Pagan Monotheism in the Roman Empire