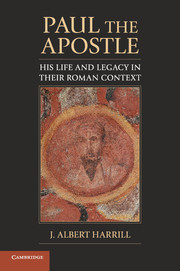 Paul the Apostle
His Life and Legacy in their Roman Context