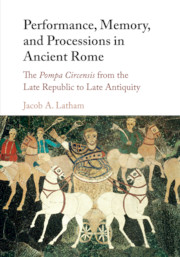 Performance, Memory, and Processions in Ancient Rome
The Pompa Circensis from the Late Republic to Late Antiquity