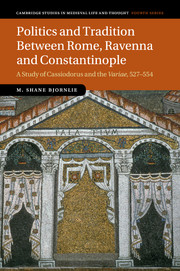 Politics and Tradition Between Rome, Ravenna and Constantinople
A Study of Cassiodorus and the Variae, 527–554