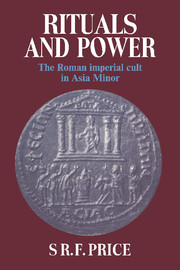 Rituals and Power
The Roman Imperial Cult in Asia Minor