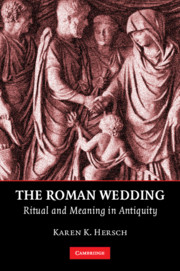 The Roman Wedding
Ritual and Meaning in Antiquity