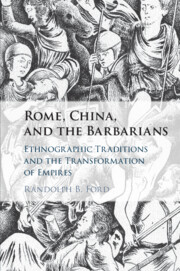 Rome, China, and the Barbarians
Ethnographic Traditions and the Transformation of Empires