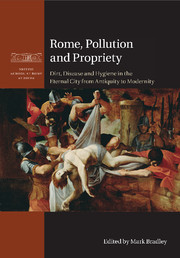 Rome, Pollution and Propriety
Dirt, Disease and Hygiene in the Eternal City from Antiquity to Modernity