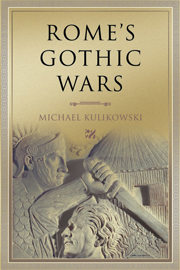 Rome's Gothic Wars
From the Third Century to Alaric