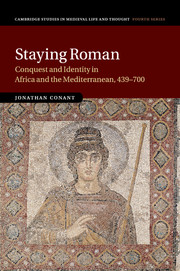 Staying Roman
Conquest and Identity in Africa and the Mediterranean, 439–700